Explore Nature at its Best

Hunting Island, just 10 minutes from Fripp, offers a day of exploring and is one of South Carolina's most popular state parks.  With 5 miles of beaches, a salt water lagoon and thousands of acres of marsh and maritime forest, you'll enjoy all that nature has to offer.  The island is also home to the only publicly accessible lighthouse in the state.  Hunting Island Lighthouse is a must see on your visit, offering beautiful views of the barrier island and surrounding seascape.  And don't miss a visit to the Nature Center.  You'll find live animals and exhibits as well as special programs throughout the year. Check out Local Fun for more off-island adventures. 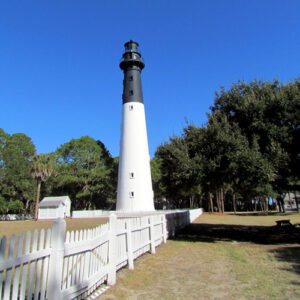 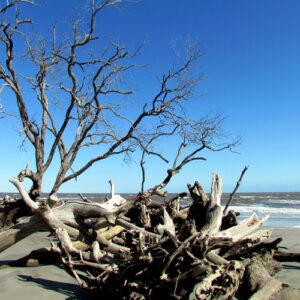 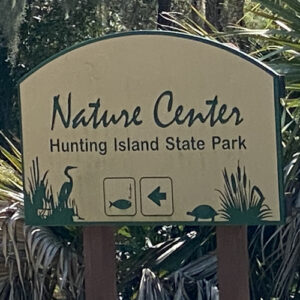 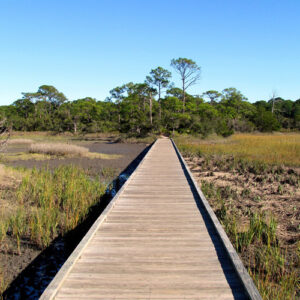 Climb to the top (167 steps) of Hunting Island Lighthouse for fantastic views of the barrier island and surrounding waters of the Atlantic. 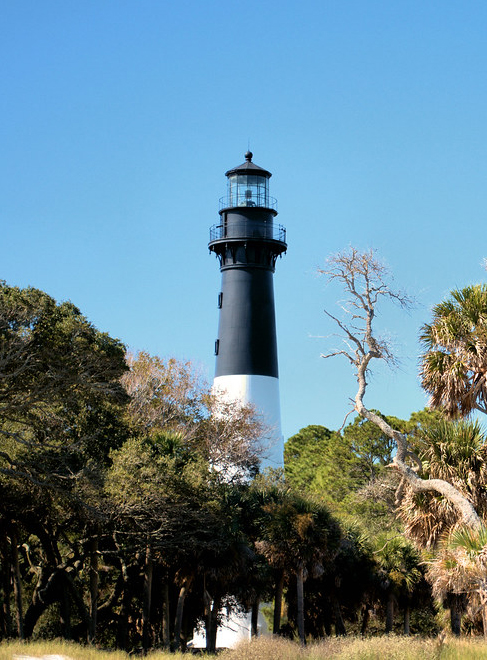 The lighthouse was closed for repairs in May 2003 when cracks were discovered in several of its cast-iron steps. In a renovation that spanned more than 18 months, construction crews not only repaired the cracks, but installed steel braces beneath them for reinforcement. Left unpainted, the silver-gray braces stand out in sharp contrast to the black cast-iron stairs. The contrast helps distinguish between the original structure and modern improvements, which protect the lighthouse’s historic integrity.

The original structure was built in 1859 and rebuilt in 1875 after it was destroyed during the Civil War. A unique feature of the lighthouse is that it was constructed of interchangeable cast-iron sections so it could be dismantled should it ever need to be moved. Severe beach erosion made it necessary to relocate the lighthouse 1.3 miles inland in 1889. (Source: South Carolina State Parks)

Got the bikes out and spent the whole day riding round Hilton Head Island! 🚴

We started from Mitchelville Freedom Park (free parking!) and cycled down to Burke’s Beach where I may or may not have had a quick power nap on the beach 😴😂

The most popular beach is at Coligny Beach Park which is where we went next. It was so refreshing to get in the sea and escape the humidity for half an hour! 🌊

This is a girls dream beach, there are roosts all ...

We were able to go up the lighthouse, which was a wonderful experience! The view from the top was amazing, and it was fun to learn a little history of lighthouses in general, and of this lighthouse in particular. Originally, this was a very isolated location, taking a journey of 2-3 days just to go to the nearest town and back!

It was on this day in 1789, that Congress approved an Act for the establishment and support of lighthouse, beacons, buoys and public piers. Today is National Lighthouse Day, with lighthouse groups offering the general public a host of fun-learning activities to enjoy – including tours, cruises and presentations that pay special tribute to America’s lighthouses and their grand history.

We had a fabulous time on #HuntingIsland this ...

We had a fabulous time on #HuntingIsland this week! You can look forward to learning about the historic island and lighthouse in future Marci-Anne Mondays! For now, here’s a fun fact about the #lighthouse: the lighthouse is made with interchangeable cast-iron sections so it can be easily moved if necessary. In 1889, it was necessary due to severe erosion and the lighthouse was moved 1.3 miles off the shoreline. 🧠

Explore and learn at the Hunting Island Nature Center.  With programs and exhibits available year 'round (varies by season), this is a great way to see animals up close and learn more about the natural habitants found on the island.  Call for current programs 843-838-7437.

Just cruisin 🚲 around fripp_island and hanging ...

Just cruisin 🚲 around fripp_island and hanging out with the 🦌. Watch the video at the end!

Post from delk_haigler_photography. . “ Daybreak Of Hope “
The Hope Tree  was saved and did not fall to a storm like I suspected , nor did the beach replenishment claim it. I just got a phone call from Friends Of Hunting Island to let me know that with all the recent storms and beach replenishment that they made a decision to remove this tree before it was washed away. The tree was removed intact and will be relocated and on display in the New Hunting Island Visitors Center that will be opening in late December. I am so happy to learn that this beautiful Hope Tree did not get washed away but will be saved and on display for many to see for years to come 😊. . 📷:delk_haigler_photography ...

We asked, you voted, and the winners are....Spike and Chomper from the Land Before Time! 🎉 We had over 3,500 votes and 1,776 were for Spike and Chomper (Chomp for short). Thanks to everyone who voted! Be sure to head to the Hunting Island Nature Center to say hello to Ranger Megan, Spike & Chomp. ...

Hunting Island Lighthouse and Keeper's quarters before they were moved in 1888. 📷: Friends of Hunting Island Member Ted Panayotoff ...

Hunting Island State Park needs your help! Our two alligators, Bonnie & Clyde have moved because they have gotten so large, but now we have 2 new baby alligators! Now we need your help to name them. Swipe left to see the choices, then head to the link in our bio to cast your vote! The pair with the most vote wins! 🐊 ...

Jack loved meeting the alligator at the Hunting ...

Jack loved meeting the alligator at the Hunting Island State Park Nature Center! He woke up this morning and found one at home, too. We are excited about today's Alligator Talk program! #scstateparks #huntingislandstatepark #huntingislandnaturecenter ...

Did you know the Horseshoe crab is more closely ...

Did you know the Horseshoe crab is more closely related to spiders and ticks than to crabs? What is your favorite marine animal fun fact? ...

These cooler temps feel like the perfect weather for camping on HI. Have you camped here before? What is your favorite memory? 📷: maria_boone ...

Hike through Hunting Island and discover the amazing terrain and wildlife found on this beautiful barrier island.

Twelve Easy and Moderate trails offer varying sites and discoveries through the maritime forest, around lagoons and over the salt marsh.  Among the island's wildlife, look for alligators and deer as well as owls, hawks, egrets and other wading birds.  Don't forget your camera!

The cold and dreary weather in Asheville the past ...

The cold and dreary weather in Asheville the past few weeks was really wearing on us, so we fled to the beach for the week. 🏝 ☀️ ...

Peace Love calmness is all what’s needed at this...

Banzai, mama Loggerhead that was found injured on ...

Banzai, mama Loggerhead that was found injured on Hunting Island was released today after her rehab at the southcarolinaaquarium! We are so thankful for all the work they do. Best wishes Banzai, come visit us soon! ...

🌴I don’t share much on here about my marriage, I mean it is the 𝑏𝑒𝑎𝑢𝑡𝑦 barn, not the 𝑚𝑎𝑟𝑟𝑖𝑎𝑔𝑒 barn. But I honestly don’t know how I would have done these past few years without Christian being here for me every day. I am such a relational person that as I’ve gotten older other relationships have drifted, but he has been my solace. He makes me laugh when I don’t want to laugh, helps me not to get worked up about things that don’t matter, doesn’t pick on me (like my ex boyfriends liked to do.) I like being with him as much today as when we first started dating. I like long drives to buy old trucks, I like listening to him pray every night before dinner, I like how he cares about helping people, I like how he is uncanningly honest and how makes me coffee every morning. I like how he’s his own person and doesn’t care about having an image. I like how he is excited to see me when I look like Chewbacca and claims I look “amazing.” He tells me all the time that I, “could have done better.” But I know I’m the lucky one. This is the end of my sappy post. I just wanted you all to know that I couldn’t do what I do without a good dose of encouragement some days and this is where it comes from. ❤️ hothouserevival
•
•
#huntingislandstatepark #beaufortsc #sc #southernliving #amazonfashionfinds #lowcountrysc #lowcountrylife #southernliving #womeninbusiness #femaleentrepreneur #christianwomeninbusiness #christianwomencommunity #christianwomenbloggers #cleanbeauty #veganbeauty #indiebeauty #beautyblogger #lifestyleblogger #nontoxiclifestyle #organicskincare #skincareblogger #greenbeautycommunuty #southcarolinabeaches ...

Do you have plans to camp on HI this year? Such ...

Do you have plans to camp on HI this year? Such great memories are made here. .
. 📷: kimieyates ...

Lighthouses were used to warn sailors of dangers ...

Lighthouses were used to warn sailors of dangers in the seas but also aid in navigation. The colors and patterns a lighthouse was painted was unique to each lighthouse so sailors could identify where they were during the day. At night sailors used the individual light pattern, a combination of flashes and pauses, to know where the ship was located. .
.

The 🇺🇸Best of the USA🇺🇸 &
🌴💙🌴 Best of the Palmetto State 🌴💙🌴
Proudly Present Our Featured Artist 📸: .
.
~~~~ chuckparker1
.
.
Photo selected by: _jagerbomb07
.
.
.
💫A Huge Congratulations on being featured with us!! Thank you for sharing your images & supporting our Love of South Carolina Artists!! 🌴💙🌴 .
.
.
💫Please visit the Artist's page and show them some
South Carolina L💙ve! 🌴💙🌴 Please do not repost without Permission from us & the Original Artist!! Thank You!! .
.
.
💫Check out 🇺🇸 Bestofthe_USA 🇺🇸 And, 🌴💙🌴 BestofthePalmettoState 🌴💙🌴
Then use #bestofthe_usa and/or #bestofthepalmettostate for a chance 2B featured on our pages!! .
.
.
PAGE OWNER:
Karri🌴 liveasaltyfloridalife
USA ADMIN TEAM:
Carrie💙 cably723
Roxana🌴roxanawaltersphotography
MODERATORS:
Peggy💙 _jagerbomb07
Renee🌴 reneetollison
Cathy💙 breckgirl36
Alyssa🌴through_birds_eyeview
.
.
💫🇺🇸 Please Go Check Out Our CATALOG of Pages At: 🌟🇺🇸 BestoftheUSA_FamilyPages 🇺🇸🌟 Follow Your Favorites and Then Use That Pages ###’s!🌟 We would love to be featuring YOU on one of our 3️⃣5️⃣ plus pages Representing States and specialties all Across the USA!🇺🇸💫 .
.
.
~~~~~~~~~~~~~~~~~~~~~~~~~~ . .
#icu_usa
#southcarolina #exploresouthcarolina #onlyinsouthcarolina
#visitsouthcarolina #scphotography #southcarolinaphotographer #southcarolinaphotography
#scphotographer
#godscountry
#mysouthernliving
#hiltonhead
#lowcountry
#discoversc
#chs
#hiltonheadisland
#pawleysisland
#discover_carolinas
#beaufortsc
#coastalcarolina
#southcarolinawater
#scwx
#insta_carolina
#beach #huntingislandstatepark
#bestotpalmettostate_chuckparker1
#busafeatured_chuckparker1 ...